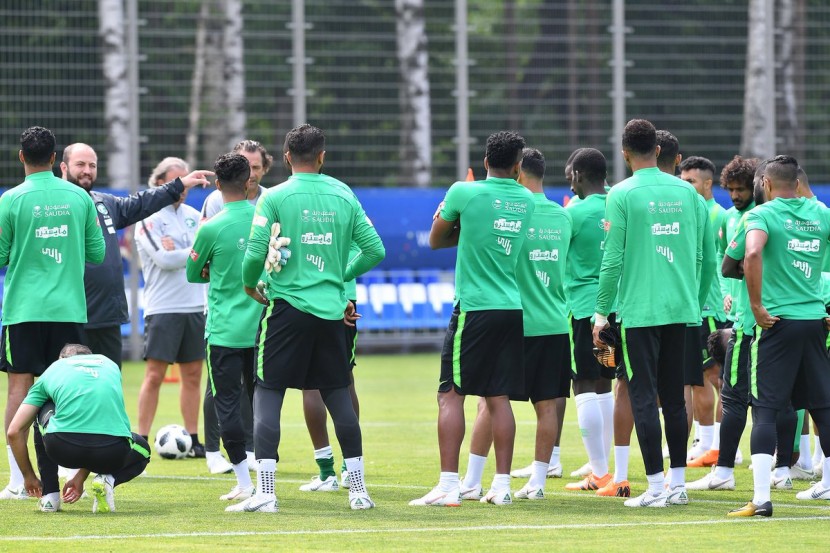 YOUR GUIDE TO SAUDI ARABIA AT THE 2018 FIFA WORLD CUP

The only Arabian team from Asia to make the 2018 FIFA World Cup was Saudi Arabia, who managed to do so after a 1-0 victory against Japan on the final matchday of the AFC World Cup Qualifiers. Fahad Al Muwallad’s lone second half goal sent the fans in Jeddah into a frenzy on that night, but it was what came after that night that signaled trouble for the Falcons.

Contractual issues saw current Australia head coach Bert Van Marwijk leave after his success in qualification for the World Cup – Saudi Arabia’s first since 2006 – as his replacement Edgardo Bauza was met with uproar from Saudi fans and media after failing to produce anything of note with both Argentina and the UAE National Teams. Bauza was expectedly sacked just months later, before Juan Antonio Pizzi was brought in to the side before the Arabian Gulf Cup last November.

As we head into the final days before the World Cup, Ahdaaf presents to you the most comprehensive preview there is on the Saudi Arabian National Team.

Saudi Arabia are expected to play in a 4-2-3-1 or 4-3-3 formation, with recent friendlies indicating Pizzi may go for the latter. The main idea is to maximise the potential for the midfield to control the ball and the full backs to widen the pitch with their offensive runs, while the wingers cause problems in between the channels and Fahad Al Muwallad receives balls in behind the defence.

Whether this is done with a 4-2-3-1 or 4-3-3 formation is yet to be seen, with Al Jassam probably going to play behind the striker in the former ahead of Al Faraj and Otayf. Should Pizzi indeed stick with the 4-3-3, Al Jassam may play from a deeper role or be replaced by the midfield monster Kanno.

The idea is to play based on the idea Ramon Diaz set out for his successful Al Hilal side in 2017, in combination with Pizzi’s pressing principles himself. However, whether Saudi Arabia play on the backfoot in the World Cup remains to be seen, but it is worth mentioning that they are as dangerous on the counter-attack as they proved against Germany in a recent friendly with Al Dossary being the main instigator of their attacks.

Saudi Arabia are more than capable of doing so, with ball-playing capabilities in goal, defence and defensive midfield if the right players are chosen to send long balls under pressure onto the front trio. Al Muwallad is excellent at latching onto these balls, while Al Dossary will be expected to carry it from the midfield third to the final third.

Yet, despite their capabilities, Saudi Arabia have issues with their mentality which is their biggest problem without a shadow of a doubt. They may be talented, but concentration and motivation is a big issue for players who suffer from large periods of inconsistency due to this. Saudi Arabia on paper are good enough to qualify if they play it well, but never place your hopes in a Middle Eastern side (as us experts will tell you!), they may as well beat Russia and draw with Uruguay but then get thrashed 3-0 by Egypt. Oh, it’s possible.

- Previous article « Romário on the bench in Doha: The Brazilian Tourist at Al-Sadd