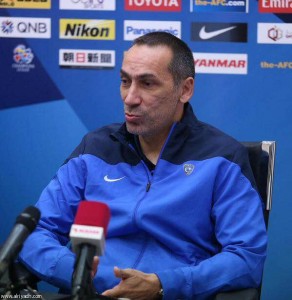 Giorgios Donis, the man who brought Al-Hilal back.

Your key for transfers.

Samaras and Neves were amongst the high profile departures.

*Find the rest of the Middle Eastern Football transfers on ahdaaf.me/transfers

Al-Hilal were placed in a group with hopefuls Lokomotiv Toshkent, spicy opponents in the “Zaeem” Al-Sadd and a convincing Foolad Khuzestan. In their first game of the group stages they saw off the challenge of Lokomotiv with an astute 3-1 win in Riyadh, helped by none other than Thiago Neves who now misses the quarter finals after a big money move to Abu Dhabi-based side Al-Jazira.

A short trip to Doha didn’t end well, with Khalfan Ibrahim providing a massive threat, dashing the hopes of “Hilali” fans in the process. A draw with Foolad didn’t help either, as their hopes of qualification were only helped by Foolad’s winless streak of 3 consecutive draws. However, the return ‘leg’ of the Foolad series saw Al-Hilal top the Iranian outfit with goals from Saudi duo Yasser Al-Shahrani and Nasser Al-Shamrani.

Another double from the Saudi players – this time Al-Abed and Al-Zori – helped Al-Hilal to two consecutive wins, making themselves favourites for the top spot as they welcomed Al-Sadd to the King Fahd International Stadium. Mohammad Kasola assured the Al-Hilal fan base of top spot with an own goal in the 69th minute. Al-Hilal would meet a weakened, yet an absolute mammoth club in Persepolis of Tehran.

The only club to match Al-Hilal in terms of fan base across the Middle East, Persepolis grabbed a late winner against the “Blue Wave” through Digao’s tap in, unfortunately ending up in his own net – in Tehran in front of a raucous 100,000 attendance. Al-Hilal bit back, with a marvelous 3-1 aggregate win helped by 24,000 fans at King Fahd International Stadium. Al-Hilal only scored one goal through a foreigner – Thiago Neves – and relied solely on their local players to provide the goalscoring efforts. They now face Qatari Champions Lekhwiya.

Donis sets up his Al-Hilal XI with an unorthodox 3-6-1 formation that looks at making use of the wing backs, who position themselves far from the build up to stretch play and combine in the final third. Creative and controlling authorities go to the 4 midfielders based centrally, and with new introduction Khaled Al-Kaabi partnering Salman Al-Faraj we get to see a breath of fresh air in the Al-Hilal midfield despite the reliability of ageing Saud Kariri, who may return for this game.

Al-Shalhoub’s tactical intelligence may prove vital in a game like this, where his intuition helped Al-Hilal to a fine start against newly promoted Al-Wahda in the ALJ League. It will be interesting to see how Donis sets his team up with a plethora of options on show, however the most important part of the team is the relatively solid back 3 of Kwak Tae-Hwi, Digao and Mohammad Jahfali.

Muntari was brought in as Soria’s replacement; Muftah’s loan was extended while Abdelmaqsoud returned from his loan stint

*Find the rest of the Middle Eastern Football transfers on ahdaaf.me/transfers

Lekhwiya began the 2015 ACL campaign with a slight hiccup after only garnering one point from their first two group matches. The opener took place in the Azadi Stadium and although the Cops held Persepolis to a 0-0 stalemate at halftime, they gave way in the second half. Goals from Mohsen Bengar, Hadi Norouzi and Mohammad Nori meant that Lekhwiya returned to Qatar shattered.

Their first home match was against Riyadh giants Al Nassr and it was a feisty encounter. There were bookings galore and Nassr ended the match with ten men after Khaled al Ghamdi was sent off. It was Nassr who took the lead through a Mohammed Moussa own goal just after halftime, only for Vladimir Weiss to equalize minutes later. The match finished 1-1 with both sides missing penalties – Weiss and al-Sahlawi the culprits.

After the two early heartbreaks, Laudrup’s men then went on a great run, winning the remaining four consecutive matches. A home-and-away double over Bunyodkor was completed with a Nam Tae Hee penalty in Tashkent and superb curling effort from Weiss in Doha. Revenge against Persepolis followed, three second-half goals from Youssef Msakni, Tae Hee and Ali Afif doing the job. Then came the Riyadh leg against Al Nassr which was just as heated as the home fixture. Lekhwiya wrapped up the tie by the hour mark with goals from Msakni, Tae Hee and Sebastian Soria while Hassan al-Raheb’s strike for Nassr would only prove to be a consolation. The end of the match saw Nassr’s Fabian attack Tae Hee, for which he would receive a hefty fine and suspension.

Lekhwiya went into the Round of 16 as toppers of Group A and were drawn to face rivals Al-Sadd – the first time two Qatari teams were drawn together in the AFC Champions League. Playing away in the first leg, they brought down Al-Sadd 2-1 with goals coming from Soria and Msakni. Coming into the second leg with two precious away goals, they had to battle a resurgent Al-Sadd who cancelled out Msakni’s early strike with two goals of their own, bringing the tie to level terms. The match witnessed a nail-biting finish after Ismail Mohammed scored with 7 minutes remaining to give Lekhwiya a 4-3 aggregate lead. In the very last minute, Ali Asad gave Lekhwiya a major scare when he popped up with the goal at his mercy. But somehow, Lecomte saved his team from point-blank range and Lekhwiya progressed to the quarterfinals.

Tuesday’s match presents a demanding challenge for Lekhwiya especially with the change at the helm, absence of four crucial players and the departure of Soria sure to have its effects on the team. How Djamel Belmadi copes with it all is the all-important question come matchday.

It seems almost inevitable that Belmadi will continue with the 4-2-3-1 that Laudrup used during his time at the club. The team played with it during the recent friendly loss against Malaga. With Chico Flores out with an inury and Ahmed Yasser suspended, full-back Mohammed Moussa will likely deputize in the centre of the defence. It’s not a position he’s comfortable in and it was visible during the Qatar national team’s match against Olympiakos. His partner Dame Traore will have to be extra-vigilant to shore up Lekhwiya’s weakened defence, which will be facing the threat of a dangerous Carlos Eduardo.

In the middle of the park, the untested centre-midfield combo of Luiz – Abdelmaqsoud will see its first real test against Hilal’s superior midfield. Lekhwiya will sorely miss Karim Boudhiaf’s abilities in this regard. Up front, we will not get to see the telepathic Nam-Weiss-Msakni trio but two is better than none, as Belmadi will attest.