Iraq and Katanec on the World Cup trail

“If you want the result immediately from me in Asia Cup then you can start to bring another coach, because I have no magic stick,” Srećko Katanec barked at his first press conference after a barrage of questions from journalists asking if he was intending to go to the UAE to win the Asian Cup . The Iraqi sports press has a long history of being ever-demanding of the foreign national coach, one analyst laid it bare “critics of the foreign coach take it personally as if the coach is stealing the nation’s own money!” The Slovenian was appointed last year with the view to getting the Lions of Mesopotamia to the 2022 World Cup in Doha and the coach is under pressure to make that a possibility even before a ball is kicked in their qualifying campaign.

There are great expectations however unrealistic, considering Iraq’s recent World Cup qualifying record – a football nation on the decline rather on the up, with its last and only World Cup appearance coming in 1986. But tune into one of many of Iraq’s sports programs on various networks, you will find analysts labelling Iraq’s qualifying campaign for the 2022 World Cup in Doha as a golden opportunity – before the knives are set out on the table ready and waiting for Katanec, mainly from unemployed local coaches looking for opportunities to manage at international level. When they talk about the Slovenian, they point to his unsuccessful spell with the UAE rather than concentrate on the accomplishments with his home country – leading the national side to their first World Cup and the European Championship, and overlook his stellar career as a player with Partizan Belgrade, VfB Stuttgart and Sampdoria. His record since his appointment a year ago, has been encouraging, with only four defeats to Argentina, Qatar, Tunisia and recently Bahrain in the final of the WAFF Championship, and they begin their World Cup trail in Manama against the same side.

Katanec’s mentality and character is well-suited to the inner workings of the Iraq FA and the drama which comes with it. He listens to none of it! There were questions over his contract, a conspiracy according to one TV sports host involving the previous vice president Sharar Haidar, the coach’s agent Behrooz Dezhbod – an Iranian spy who wants to damage the domestic game according to FA official Kamil Zaghir – and former player Nashat Akram, an ex-client of Behrooz. All part of the pantomime surrounding Iraqi football and the FA. Iraq’s sports show make outrageous remarks and bring guests on their shows to make outlandish statements – sensationalism sells and with daily programs and TV ratings, the more eye-catching and bizarre the better. One well-known presenter alleged Katanec had an artificial heart – however such statements are rarely corroborated by any source or evidence.

The Slovenian has been surrounded by chaos, losing his son Oskar along with the local fitness trainer and assistant coach, as part of the post-Asian Cup purge, in which the Slovenian reportedly gave the Iraq FA an ultimatum, if his son lost his job, so should the fitness trainer Sardar Mohammed, allocated as the Slovenian’s personal driver while he stayed in the city of Arbil. However he has kept steady on the task of managing the Iraqi side. He knows he cannot change the mentality of the Iraqi player, especially the local contingent, however he feels he can implement a game plan, a blue-print of which, was laid out against Iran at the Asian Cup. It showed what could be possible with the current crop of players.

The Lions of Mesopotamia have a stable nucleus – Jalal Hassan in goal, who will be missing for the first game of the qualifiers after getting injured after a long arduous season, the rejuvenated Ali Adnan at the Vancouver Whitecaps back from his six-month suspension – who was also assisting as Katanec’s translator at the Asian Cup and now one of the experienced players in the squad along with Ahmed Ibrahim. The team also has Justin Meram and Ahmed Yasin and the maestro Hussein Ali. The likes of Safaa Hadi and Alaa Abbas – handed a debut by Katanec on the eve of the Asian Cup – have thrived under the tutelage of the Slovenian and he has shown the willingness to blood young players, with Maitham Jabar and Mohammed Qasim, examples of a gradual change to the squad.

In Mohanad Ali, Katanec has a gem unearthed from the Iraqi League – the kind of goalscorer the Iraqi fans have longed for since the retirement of ‘the Assassin’ Younis Mahmoud. The striker has had a torrid start to his life at Qatar’s Al-Duhail and has yet to hit the mark, however Mimi’s form for Iraq under Katanec has been impressive and he will be key to Iraq’s World Cup campaign.

The decision to drop former captains Saad Abdul-Amir and objecting to calls to select the league’s top scorer Alaa Abdul-Zahra – a critic of Katanec – demonstrates the Slovenian is looking to build a new team. One of his selections has been questioned, the striker Ayman Hussein, who has only two goals in 30 matches for the national side, was picked by Katanec despite playing sparingly at his Tunisian club CS Sfaxien. However if you look at the type of striker Ayman is, the Kirkuk-born forward at 6ft 2 inches is a very different style compared to Mohanad Ali, Alaa Abbas and Mohanad Abdul-Rahim and gives the team other options, whether the Slovenian wants to play three in attack or a target-man. The Iraqi coach however has refused to answer to his critics over his selections and has publicly backed all his players, from ever chastised Jalal Hassan, and Ayman. His message is clear if he has other options players will be dropped. The dilemma at right back remains with Alaa Mahawi and Samih Saeed both unconvincing and a liability on more than one occasion while the cluster of midfield options have yet to yield a playmaker of the ilk of Nashat Akram.

Katanec was almost shown the door by the Iraq FA, just 20 days ago after supposedly losing support with a string of FA officials bulking at the coach’s $1.2m annual contract. However what kept him in the job was the Iraqi FA’s inability to find a suitable replacement in the short space of time. The Iraqi FA president held a meeting at the home of the Olympic coach Abdul-Ghani Shahad in the city of Najaf, however after the trainer refused to juggle both roles. Stuck, the only thing they could do is place conditions on Katanec in his second year of his three-year contract – laughably Katanec’s agent revealed the FA wanted the Slovenian to guarantee World Cup qualification! His reply was in football there were no such guarantees. He has the insurance of a $1.2m compensation clause in his contract if the Iraqi FA decided to sack him early on in the qualifying stages. The clause states the coach would be paid the remainder of his salary for the year at any point the Iraq FA would terminate his services, so the FA will be reluctant about sacking Katanec early on during the qualifiers.

For long it seemed Katanec and the Iraq FA were not on the same wavelength – the Slovenian was even surprised the Iraq FA had released the schedule of matches with the wrong date for the opening game against Bahrain. The month of September means Katanec is in his second year of his contract and gives the coach a safety buffer.The Iraq FA is likely to stick with the Slovenian for the time being.

Qualifying for a World Cup in Asian section is all about adapting and acclimatising to conditions in each qualifier whether it is the temperatures, the long-haul flights or the quality of the playing surface, the team which gets over those barriers will prevail. In the 2010 World Cup qualifiers one of the reasons for Iraq’s failure was not the well-documented ozone treatment or the Royal Honey the players were handed before the final group game in Dubai but the toll the long-haul flights and travelling had on the players. Iraq the Asian Cup champions had 16 foreign-based professionals in their squad, some of whom had only ended their season at their clubs and over 43 days on the road the players more or less circled the globe travelling 39,595 km by plane and coach from Amman, to Damascus, back to Amman, Bangkok, Sydney, Brisbane, Singapore, Dubai, Beijing and Tianjin and returning to Dubai. This was the main reason why Iraq were exhausted and had nothing left in their decisive qualifier with Qatar and why it untimely failed to qualify. There should have been no need to travel to Amman, Damascus or Bangkok to play friendlies while the Iraq FA elected to fly the team on cheaper transit flights instead of travelling direct to Brisbane or Dubai. However Ozone treatment and the Royal Honey gained the headlines and the administrative mishaps over cheap transit flights, being held at the Jordanian-Syrian border for hours even sleeping at an airport and unnecessary friendly matches were all forgotten.

If Katanec can somehow navigate the team around the chaos of the Iraq FA with its administrative issues (visas, passports and transits) and the demanding and often extorting media and at the same time temper the expectations of the passionate fans to get to Doha in 2022, it will go down as one of the greatest ever achievements. The Iraqi media will tell you Iraq has a golden opportunity to qualify for the World Cup without coming to the realisation the Iraqi team of today is no longer the same team of the late 70s and 80s. Even Iraq’s former coach Zico highlighted the difference when standing at the spot where he scored against Iraq’s national team in 1986 stated clearly the players who he played against and who qualified for the World Cup in Mexico were better technically than the Iraqi players he had coached!

What does Katanec need to do to qualify? In the past in the latter group stages Iraq has failed to keep pace with the leaders and with only four of the best runners-up from eight groups qualifying for the next stage, Iraq must attempt to pick-up points in every game to keep in touch with Iran, highly expected to qualify as group winners. They will have the advantage of hosting home matches in the city of Basra. It will be the first time since 2011 Iraq has been able to play World Cup matches at home. The points gained on their travels will be key. A win Manama will send a positive message that these Lions have the character to qualify for the World Cup in Doha and a good start is needed from Iraq and Katanec to make that possible.

- Previous article « Demanding league titles without understanding the history behind them 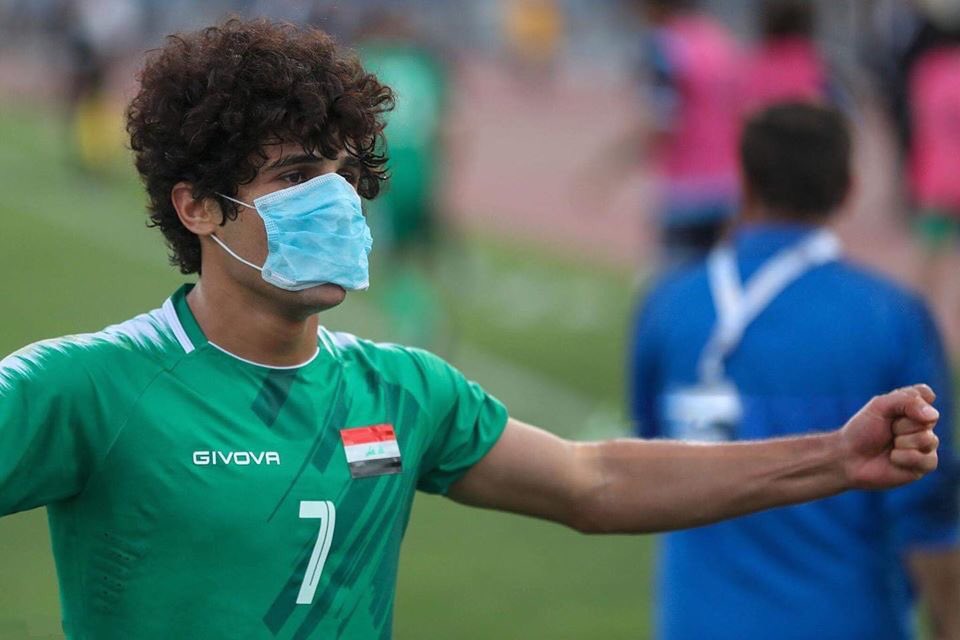 Next article - From Tahrir square to Amman: Katanec’s siege mentality »