Demanding league titles without understanding the history behind them

“If the Iraq FA fails to return the titles before 1974 it would be removing the history of the past,” Iraqi football supporters, mainly fans of Al-Shurta and Al-Quwa Al-Jawiya have cried in recent days. “Ya Masoud, Ya Masoud, the titles have to return,” they all chant in calls for the Iraq FA president to make the decision to ‘return’ the five league titles of the Police Club and the Air Force.

Some Iraqi football fans state by the Iraq FA dating back the league to only 1974, it destroys the history of the likes of Jamil Abbas, Husham Atta Ajaj and Ammo Baba. They continually point out the leagues in neighbouring countries with a lesser footballing history than Iraq were formed many years before the Iraqi League in 1974 and this diminishes the name of Iraq and its football history. They say the Bahraini League began in 1931 and the Jordanian League started in 1944 and the Qatari League officially started in 1972 while the Iraqi League was formed in 1974 despite its Football Association being formed in 1948. Another set of fans believe the old Baathist regime had made the decision in 1974 to remove the history of the teams of the likes of Al-Farqa Al-Thalatha, Aliyat Al-Shurta and Al-Maslaha. “Which league were the players from which formed the Iraqi national team which won the 1964 and 1966 Arab Cups from,” one Iraqi fan cried.

Aliyat Al-Shurta in their famous purple colours. The team formed in 1961 won the FA League formed of Baghdad teams on four occasions.

A request from Al-Quwa Al-Jawiya to the Iraq FA to approve the addition of titles won in 1962, 1963, 1971, 1972 and 1973), “which was cancelled because of the previous government and the former regime to change the name of the tournament at the time.”

From 1948 to 1973, there was no national league, this is despite fans claiming otherwise and they talk about the greats of the Fifties and Sixties such as Jamoli, Ammo Baba and Husham Atta Ajaj, but fail to understand the league they played in – whilst considered the strongest – featured only teams from Baghdad. They also do not point out the reason why Iraq’s League dates back to only 1974 is because of the country’s vast size. When the Iraq FA was formed in 1948, the FA – already divided along liwa or provincial lines – could not form a national league because of logistical, demographical and financial restrictions and instead leagues were played in provinces of Baghdad, Basra and Kirkuk and over years further leagues cropped up in other provinces. Some also note the pre-1974 league was not named the Baghdad League but the FA League, and the reason for this, is because the Central Iraq FA organised and administrated the league. However it was a league of Baghdad teams though before there was a league or branch of the FA in Al-Anbar province (Liwa Al-Dulaim), the Habbaniya-based army team Al-Farqa Al-Thalatha also participated in this league.

The central Iraq Football Association administered football in Baghdad and represented the country internationally, and so the league or championship while featuring only teams from Baghdad bore the name of the central Iraq FA. This was different from the leagues in Kirkuk and Basra, who had branches of the Iraq FA administering football there, known as the Kirkuk FA and the Basra FA respectively, which is why their leagues were named Kirkuk League and the Basra League. Another argument was why Aliyat Al-Shurta represented Iraq at the 1971 Asian Club Championships in Bangkok if it did not win the national league. Well I answered this question, the league was organised by the Central Iraq FA, it administered football in Baghdad and represented the country internationally. Also here is some additional information, the Iraq FA did not decide who represented the country at the 1971 Asian Club Championships, the decision was made by the Ministry of Youth and Iraqi Olympic Committee who nominated Aliyat Al-Shurta to represent Iraq at the tournament.

There is no conspiracy as some Al-Shurta and Al-Jawiya fans will lead you to believe over the old regime attempting diminish the history of these teams to benefit others such as Al-Zawraa and Al-Talaba – who were not even in the top flight when the decision on August 18, 1974 was made. The league prior was made up of Baghdad teams and the league formed in 1974, was Iraq’s first nationwide league. The five titles of Aliyat Al-Shurta and Al-Jawiya have been there since they won those leagues, and remain there, as they were a different league from the one which is played in Iraq today. If Al-Shurta and Al-Jawiya claim their titles and add these to the national leagues, then I don’t see why Basra’s Al-Minaa couldn’t demand their Basra League titles be considered and they would have more than 14 titles from 1948. 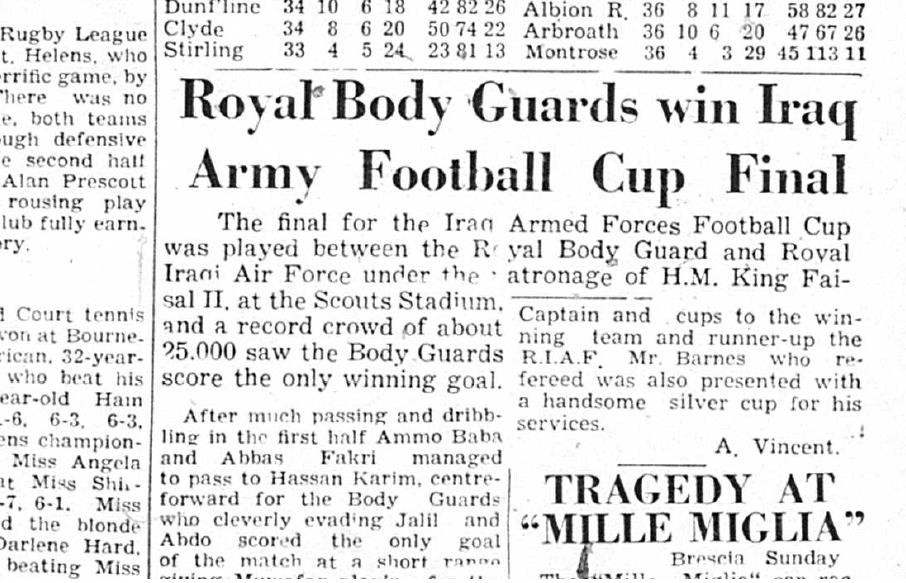 Next article - Iraq and Katanec on the World Cup trail »