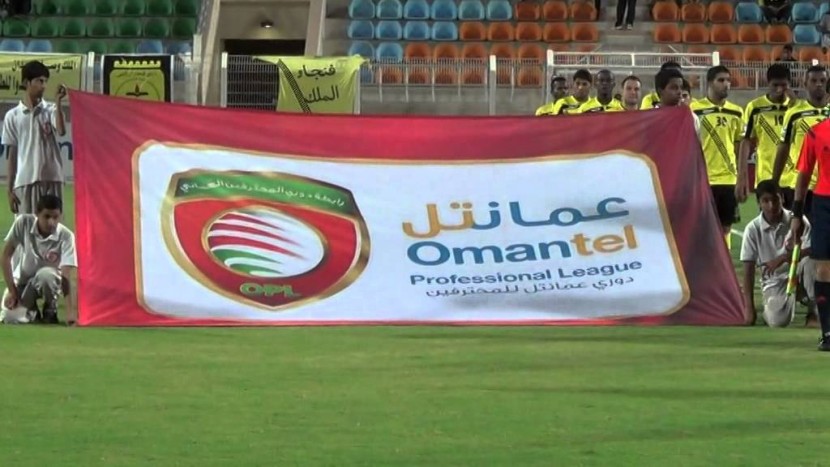 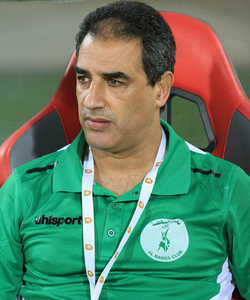 Hicham Jadrane is now the 18th managerial to be relieved of his duties in the Omantel Professional League, which is set to begin its 18th matchday on the 3rd of February. The average has risen up to over a manager gone per week, with there being only two teams who have stuck by their managers since the beginning of the season: Al-Masna’a and Al-Suwaiq.

Many Al-Nahda fans were questioning the decision to sack Jadrane now, and only a few hours after the decision to release him did Salem Al-Mazahemi, President of Al-Nahda Club, speak to the fans about the implications of the decision.

“The decision came down as a technical one, due to the recent results which have been disappointing to say the least. The results achieved were poor especially with the quality of players this team owns.”

Al-Mazahemi’s namesake, Khalifa, who is also the current assistant manager at the club, will lead the club in the remaining 13 weeks of the season. Al-Nahda, now stuck in mid-table, away from the relegation zone and far away from a title challenge, will look to rebuild in the coming period.

After all of Al-Shabab, Salalah, Sohar, Saham and Sur announced the sacking of their respective managers in the past week, time came for Al-Orouba – champions of the Omani Pro League – to do the same.

Al-Orouba announced the end of the relationship with manager Milovan Ninja Prelevic due to poor results, including no wins in the last 2 games and exiting the Oman Sultan Qaboos Cup against Al-Suwaiq. Despite this, Al-Orouba remain top of the table.

Prelevic during his time as a coach at Hajer.

The club have announced that the relationship ended by mutual consent. In other news, Farouq Abdulla will take charge of the next match as interim manager until the identity of the new manager is confirmed.

Just 4 days after announcing his departure from Sohar (see below), Abdulnasser Makees did what Muthafar Jabbar did: sign for a rival club in the space of a week.

The Oman Pro League has become one that is untrustworthy and one a manager should avoid. 66% of the managerial changes in the 2015-16 edition of the league have been via the termination of a manager’s contract. 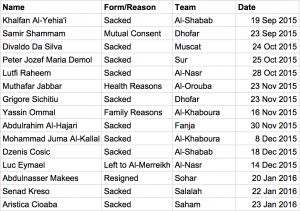 The precarious situation of managerial changes in Omani football.

Makees started off successfully at Sohar but faltered with the team, and with his previous coaching experience being in Jordan he is obviously used to this scenario. He will replace recently sacked manager Aristica Cioaba, knowing that a few bad results and Makees would be out of a job himself. The issue in question as we mentioned yesterday “many Omani news outlets are wondering if the case is a sacking by the board or an actual call for resignation from Makees himself”. The fact that Makees left to fierce rivals Saham, who are stuck in mid-table unlike Sohar, answers the questions for the news outlets themselves.

The irony in the Omantel Professional League this season is strong. Salalah were one of the few teams left that hadn’t sacked their manager in the 2015-16 season, despite being rooted to dead last and now 5 points behind 13th place. A league that is volatile in terms of managerial changes, with an average of 1 every week, it’s taken the Salalah board more than 15 weeks to do what is mainstream: sack their manager. 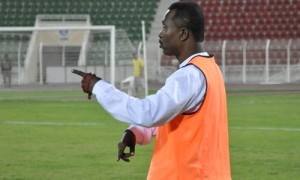 A son of the city of Salalah himself and former Oman National Team star, Younis Amaan, will do his best to help the team avoid relegation this season. 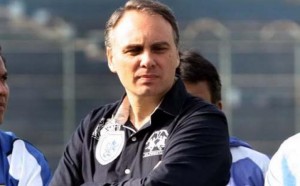 Syrian manager Abdulnasser Makees announced that he has left Sohar Club after a defeat in the Oman Sultan Qaboos Cup’s Round of 16. Despite a strong start to the season, Sohar’s form faltered as they now sit in 5th place and out of the cup yet only 6 points away from the league leaders

In the meantime, his assistant from Jordan – Montasar Sat Aboha – will take his place as interim manager but former East Riffa manager Darko Janackovic has arrived in Oman to take over the club from next week.

Many Omani news outlets are wondering if the case is a sacking by the board or an actual call for resignation from Makees himself. But whatever the issue, Oman’s biggest fan base will not want a repeat close to last season’s disaster.