Al-Ain needed a change in style, a style that could compensate for the absence of defensive organization and lack of understanding across the team (arguably the reason Al-Jazira are trailing behind Al-Ain in the league now). In came the former Al-Hilal manager Zlatko Dalic, a man who “didn’t have any special tactical ideas”, per Croatian football enthusiast Aleksandar Holiga.

But, there was one aspect Dalic excelled at and was one of the prime factors that led to Al-Ain’s resurgence into today’s situation. The Arabian Gulf Super Cup final commences today with ‘The Boss’ taking on current Arabian Gulf League Champions Al-Ahli, a game that sees Al-Ain coming into in good form following a 5-1 win over Emirates in the league. Most of this is due to the organisation and discipline applied by the Croatian pragmatist who very much exemplifies arguably the greatest manager in the world, Jose Mourinho, in the Middle East today.

“I remember his teams were organised and well-disciplined”, admitted Holiga, pointing even further to the philosophy of Zlatko Dalic. Jose Mourinho is renowned as a brilliant man-manager, able to bring the best out of his players – as if they’re playing for their lives. Once again in comparison to Mourinho; “Zlatko was a good man-manager above all, all the players liked him”.

Zlatko Dalic on Instagram, promoting togetherness and expressing the bond he shares with his bosses.

Therefore from a psychological point of view, it is clear that Zlatko is a loveable person and possesses that uncanny ability to drive his players towards achieving his and their goals. His contact with the board is close-knit, his relationship with the players is on a family level and his link with the fans is exceptional. The fans are continuously tweeting him and commenting on his photos, praising him for his achievements and attempting to get their message on to him, “take us to the top Zlatko! We love you!”.

Zlatko getting engaged with Instagram even more, thanking God for Omar’s new contract.

Tactically, Zlatko has also proved himself as the factor that Al-Ain needed to overcome their rigidity (defensively) after Cosmin Olaroiu left the club. None of Al-Ain’s managers after that were able to replicate that fear factor that was successfully instilled into other teams, but Zlatko has adapted that towards more security with capacity to succeed in terms of a broad, energetic and forward thinking philosophy.

Jose Mourinho is by no means an outright defensive manager, as against teams which are happy to sit deep and teams that do not possess the same quality as Chelsea, he plays a high pressing and highly attacking game that looks to stifle the opponents’ intentions and end the game early on. What Jose Mourinho prefers is the 1-0 and 2-0s, not the 4-3s and the 5-2s. Here is an excerpt from our tactical analysis on the top of the table clash between Al-Ain and Al-Jazira a few weeks ago:

‘As soon as Al-Ain scored their second goal they sat back in what was known as the usual Zlatko Dalic performance. Organized, cautious yet tenacious off the ball. Al-Jazira now took initiative and ended the first half with more possession even though they had less of the ball in the first half hour. Omar Abdulrahman partnered Gyan to press from the front – partial pressing more than aggressive pressing – to form a 4-2-2-2 which looked to concede less space in the centre as that was where Manuel Lanzini, Mirko Vucinic and Ali Mabkhout could all make problems in. Jonathan Pitroipa was isolated on the touchline and looked more threatening when he drifted inside, but generally Al-Jazira were too late to realise the problem.’

This is an ideology that Dalic and Mourinho both apply in their game plans – taking initiative therefore taking the lead, before providing a template for their astute style of defending off the ball.

Al-Ain against Al-Wasl – 1-0 up – having the striker stay on the halfway line while the rest form a 4-1-4 block (right back is part of back four).

Al-Ain under Dalic also have an emphasis on finding themselves in 1v1 situations during counter attacks and this is very much in their favour due to the amount of speed they possess in their attacking line-up. A 4-2-3-1 is their basic shape most of the time and with Kembo-Ekoko, Stoch, Gyan and co. feeding off Amoory or Mohammed Abdulrahman’s passes, their counter attacking instincts are threatening once applied with a certain degree of intelligence, space and finishing – something Al-Ain are poor at once Asamoah Gyan is injured.

Al-Ain counter attack with their front four, looking to make it a 4v4 against Al-Wasl (or 1v1 for each player).

To put the point about finishing into context, Asamoah Gyan has scored 11 in 11 this season while Stoch has 8 in 18, Kembo-Ekoko 8 in 15, Mohammad Abdulrahman 4 in 18 and Rashed Essa 3 in 13. The attacking midfielders have failed to add up goals when Gyan was unavailable, and Dalic knew, therefore he believed that with the AFCON going to be a stumbling block in front of the Ghanaian, defensive security was more of a must this season.

Amoory slips a ball into the halfspace for Stoch.

Against deep defences are where the true deficiencies of Al-Ain’s attacking midfielders shine. The general build-up play from Al-Ain is from Diaky/Helal/Lee MJ in the pivot to circulate the ball around the pitch and eventually reach Amoory. Amoory or his brother, Mohammad, look for space where either Kembo-Ekoko is released into the wide channel or Stoch is found in the near halfspace.

Stoch takes control of the half space, looking at his options.

This is where both strikers – Asamoah Gyan and Saeed Al-Kathiri – excel, at link-up and hold-up play, although Al-Kathiri has been a poor buy as of yet with only 2 goals scored during his time at Al-Ain in a 7-1 drubbing of Ajman earlier this month.

Al-Kathiri sneaks behind the central channel and links with Stoch’s pass.

Final Word: As we have gone through the evolution of tactics applied by Al-Ain and their managers – aiming to fit in the modern day requirements of developing, fluid football – the rise of astute tacticians in the Middle East have certainly come in hand. They key for Al-Ain and the UAE to continue this rise is to avoid fading away into mid-table obscurity and aspire to reach at least the quarterfinals of the Asian Champions League this year.

As African and Asian football aficionado @SimeonLFC claimed, “The United Arab Emirates needs to have THE team to become a force – a team that is a continental giant, not just domestically. A team like Al-Hilal, Al-Ahly (EGY) and ES Tunis”.

With Al-Ain, the UAE’s most successful and decorated club, in the mix; you can be sure to keep an eye on their exploits for the coming months… starting with today: 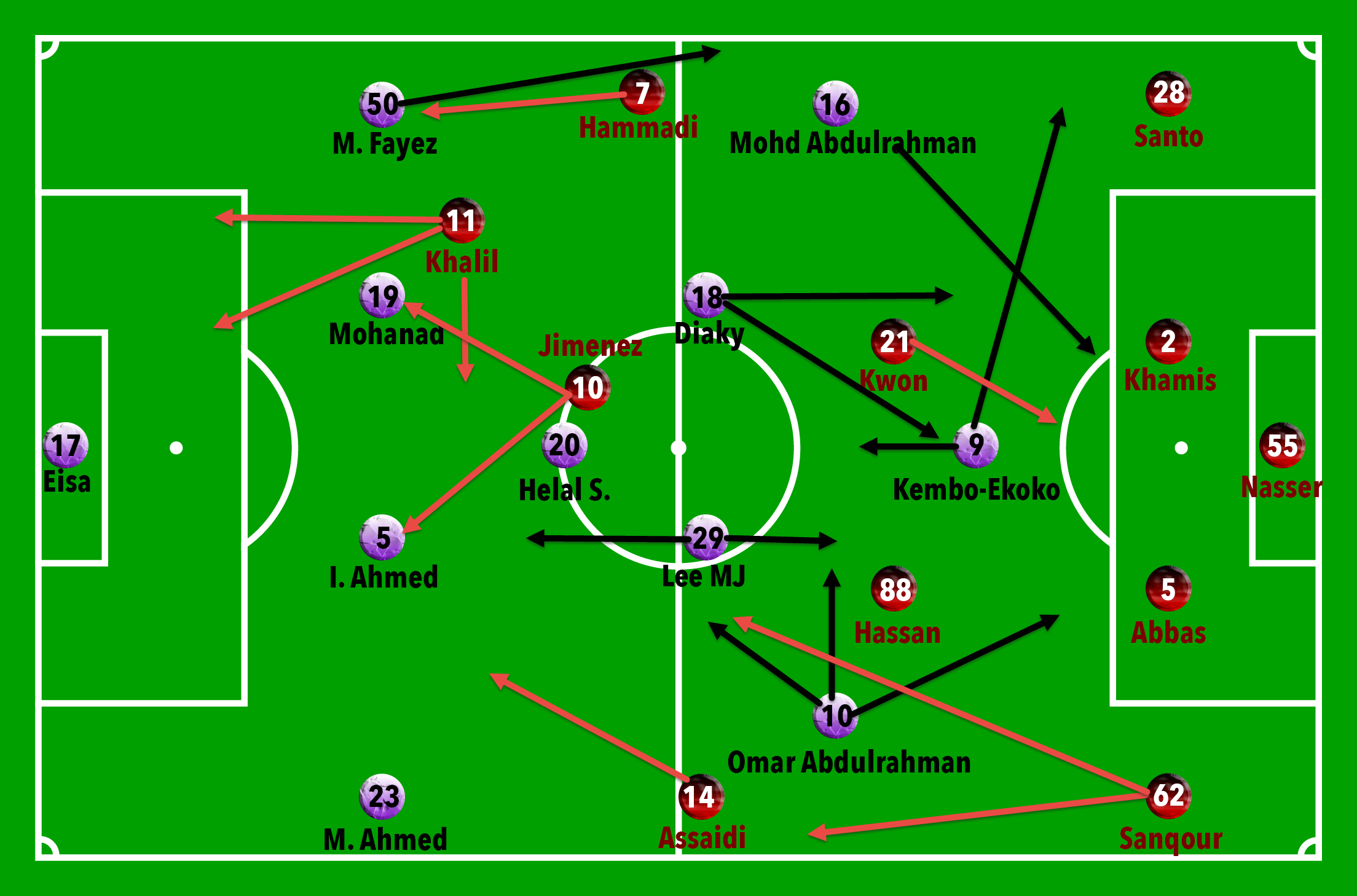