Al-Ain FC, nicknamed the “Boss” are the most successful and decorated team in Emirati football, winning every domestic competition and earning the honour of being the only Emirate side to win AFC Champions League in 2003. This triumph was followed by an 8-year domestic league drought that was ended in 2012 after escaping relegation by 5 points the year before…

Cosmin Olaroiu was the man to bring in their first pair of league titles since 2004 but two years later the Romanian signed for competitive rivals Al-Ahli and the rest is history. Al-Ain on the other hand went through 3 managers in the space of 7 months with Quique Flores proving to be a failed option to continue their stream of success. Enter Zlatko Dalic, a tough manager who was mostly known for his short time playing as a holding midfielder at Croatian giants Hajduk Split.

Dalic came in to improve the situation surrounding The Boss’ season after a fairly successful year-long stint with Saudi Arabia’s Al-Hilal where he won the Crown Prince Cup while finishing runner-up to Al-Fateh in the Saudi League. And that he did indeed, improving the situation at Al-Ain by winning the President’s Cup domestically – giving them a passage into the 2015 AFC Champions League – and reaching the semi-finals of the 2014 edition. In this three-part series we look at the tactical progress of Al-Ain from the appointment of Olariou in 2011 to our current day.

The Manchester United of the United Arab Emirates

Olaroiu’s second season as manager of Al-Ain saw him complete the first consecutive league wins in the professional era of Emirati football, and much of it depended on two of the best players in the league right now – Asamoah Gyan and Omar Abdulrahman.

Gyan signed from Sunderland the previous season in a shock loan move before making the deal permanent. His importance to the team cannot be overstated; Al-Ain were not a one man team by any means but they relied on his goals to drive them to the top. Up till the start of 2015, the Ghanaian scored 90 goals in 74 games (averaging 1.2 goals a game) for Al-Ain and is the leading top scorer of the Arabian Gulf League since the inception of professional football in the UAE in 2008-09. He also finished as top scorer of the AFC Champions League in 2014 while winning the AFC Foreign Player of the Year, further enhancing his credentials as a top striker,arguably the best in Asia.

The team itself was based around attacking instincts that favoured the flanks, aiming to draw attention from Gyan until Al-Ain eclipsed the final third, this is where their work was done. Crosses, wall passes and cutbacks were the name of the game and it was very successful as they finished with one of the best records for champions in UAE history. Not to take away anything from Gyan, his excellent positioning was key to scoring these goals. Mirel Radoi – capable of filling in defence and in midfield – was also a key cog in the line-up as he built play from deep and along with Omar Abdulrahman who elegantly penetrated defence lines and broke compact teams, it was domination used effectively by the Romanian manager.

Cosmin Olaroiu could take individual qualities and adapt them into a fluid team with everything planned beforehand. He doesn’t allow spaces for the opponents to exploit (although that can be laughed at with his current tenure at Al-Ahli). Cosmin sports a harsh look on his face, being very disciplinary earned him the nickname “Ferguson of the Balkans” by virtue of his willingness to mould young players into tough, disciplined and hard working men while taking a different approach towards the big names. Cosmin also once said: “there are three important things in football in this order: fitness, tactics and then individual quality” which is revealed in the way that his teams are known to be very fit.

His Al-Ain team were monsters in pressing, everyone except for Gyan,  as they didn’t allow the opposition to create space centrally. On the contrary Cosmin Olaroiu was an advocate of build-up play through the flanks and this was evident with many of the team’s goals being scored as a result of a long diagonal passes from the full backs (or the diagonally opposite central midfielder) or from a through ball in the channel between the centre back and the full back. The philosophy implemented by Olaroiu was at its peak with 74 goals during the 2012-13 Arabian Gulf League season being scored by a team filled with talent, versatility and energy. After all, according to Romanian Football journalist Emanuel Rosu, Cosmin was the manager who “got the best out of his teams and was able to adapt to situations. It was clear in Romania that he was very different.” This was almost perfect for Olaroiu but the demolition inflicted on domestic opponents never translated into continental accolades as Olaroiu led the club to a dismal group stage exit in the 2013 AFC Champions League.

At the end of this part, we leave you with this video showcasing the goalscoring exploits of Al-Ain in 2011-12, under Cosmin Olaroiu, when Saudi Arabian legend Yasser Al-Qahtani spent the season on loan: 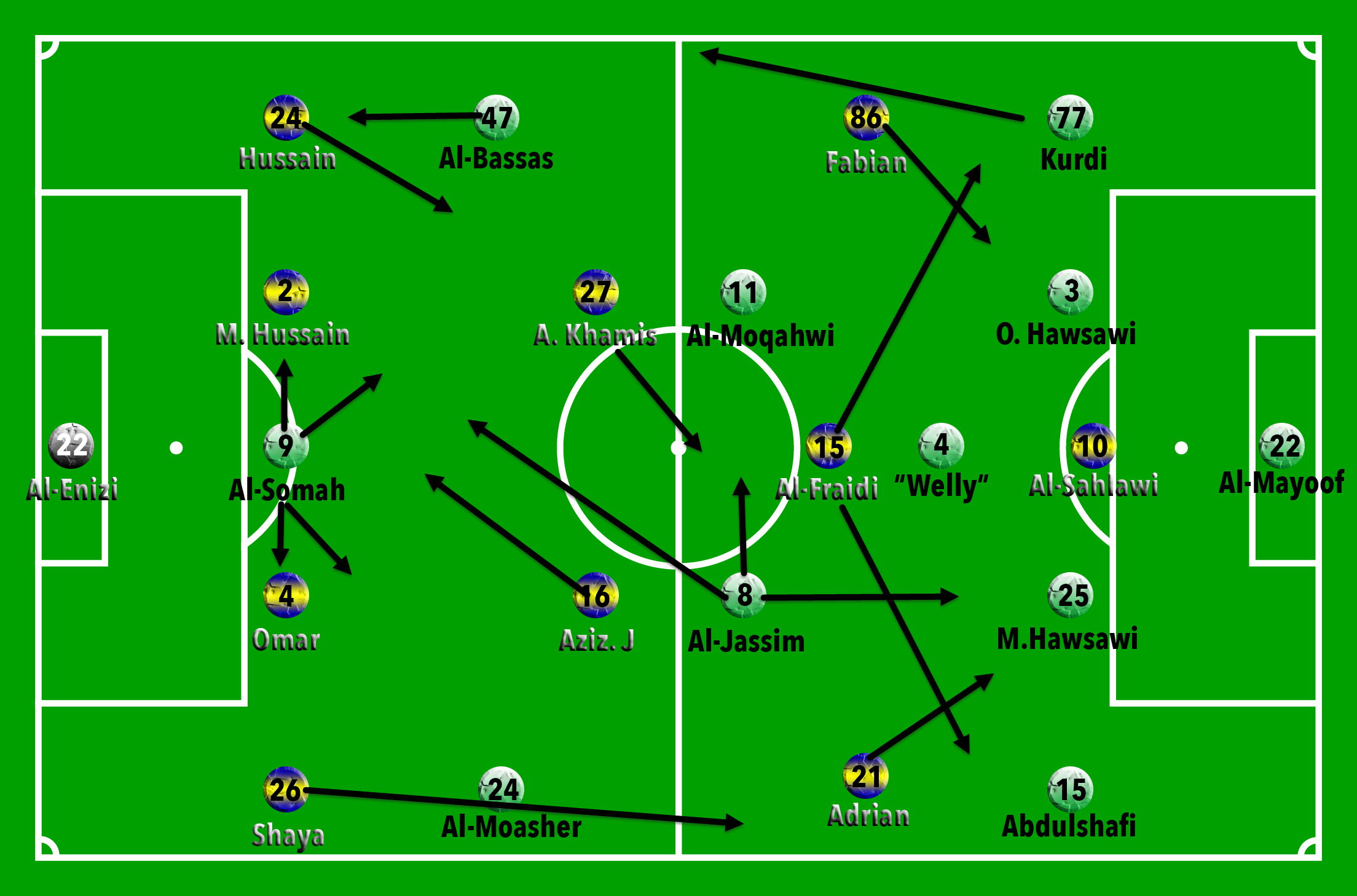