Table toppers Al-Nassr began this game on 48 points, 5 ahead of their nearest rival Al-Ahli who they faced in this match. Al-Hilal had defeated Al-Shabab earlier to cement themselves into the top 4 therefore Al-Nassr were playing for the win, aiming to distance themselves from Al-Ahli, Al-Ittihad and Al-Hilal. Al-Ahli, although, were undefeated this season and at the bare minimum was their willingness to keep that record going. And they did that in great fashion, coming back from 2-0 down to end up winning the game 4-3 in Riyadh, where their rivals are based. The Saudi Arabian ‘Clasico’ was one to remember.

Al-Nassr shaped up in an orthodox 4-2-3-1 that saw Aziz and Khamis pair up as a double pivot, tasked with protecting the defence – as you can see they sit very close to the centre backs. This double pivot came with its merits and its detriments – with one of the latter being a similar situation to the weaknesses found in Chelsea’s famed double pivot of Nemanja Matic and Cesc Fabregas. The front four interchanged throughout the match with no designated #10, mainly Adrian and Al-Fraidi switching positions throughout the game.

“Welly” supporting the 4 in midfield by anchoring behind them. Omar Al-Somah up top.

Al-Ahli continuously changed between their shape and structure from a 4-1-4-1 (as shown above), a 4-2-3-1, a 4-4-2 and a 4-5-1. Mostly, they stuck to the shape in the photo above. This provided support in the centre with Al-Moqahwi actually providing a threat from deep rather than playing on the flanks. Omar Al-Somah stayed in his role as the lone striker and Waleed “Welly” Bakhshween was the sole anchor – providing the water carrying among the team. Taiseer Al-Jassem was in more of a free role in today’s game as he used his experience, influence and energy to affect the proceedings of the game in attack.

Al-Nassr were always going to have the atmospheric advantage as their fans came in large numbers – not large enough to fill more than half of the stadium – to support them with their fantastic Arabic songs. If you missed the game against Persepolis just last week in the Asian Champions League, then you missed out on one of the best fanbase performances in World Football, never mind the Middle East.

Moving on to the tactical side of the game, Al-Nassr’s full backs were superb in using their technical ability and speed to create and penetrate. Hussain Abdul-Ghani – current Al-Nassr left back who said “If any of my teammates from Al-Nassr scores on Al-Ahli I will still not celebrate. This is my boyhood club, and I would be happy to see them win the league; just not at our expense” – put in a performance that had big-game mentality all over it. He was more involved in the build-up play for Al-Nassr and this helped him towards attempting the second most passes in the team with 49. Creating 3 chances along the way too, Abdul-Ghani exuded confidence and was tactically intelligent, behaving accordingly towards the movements of the attacking players.

Shaya Shrahili, on the other hand, used his pace to attack the Al-Ahli defence

The ball through the channel reaches the oncoming Shrahili but the chance goes begging. This was a common feature that was successfully taken advantage of by the home team, which links with the next tactical factor that affected the game:

Al-Nassr and Al-Ahli both utilised their flanks to great benefit. Previously mentioning how Al-Nassr used their full backs to take control of the wide channels, we now look at how they exploited that to score a goal.

“Welly” blocking halfspace and channel very well, but to no avail. Long ball in red dots.

Fabian had two, very threatening options in this situation. To his right, Shaya overlapping again – drawing out the opposition left back – causing a breach in the defensive line of Al-Ahli. “Welly” actually positioned himself well to prevent the through ball into the isolated channel for Al-Fraidi to take advantage of. Fabian used the second option, a long diagonal to the oncoming winger (his back foot seen just to the left of #77 on the bottom left of the photo), who actually was offside – but that didn’t matter as the referee counted the goal – and the attention of the Al-Ahli right back turned to Adrian.

Adrian slipped a ball inside without hesitation, similar to how Benzema did to Ronaldo in this week’s Clasico, and the never-say-die attitude of Mohammad Al-Sahlawi paid off as he tapped the ball in just as it was about to move away from the face of goal:

Set-piece and aerial defending causes destruction for both teams

The set-piece defending in this game was downright poor and the detrimental effects were clear on both teams as both of the teams conceded a minimum of two goals from a set piece or aerial ball. The first goal from Al-Nassr began from their consistent use of flanks in their build-up. They subsequently won a corner and a short pass was played in, drawing a defender out and deceiving the rest of the Al-Ahli defence who stuck to their zonal marking strategy.

If you look at the penalty spot, you can see Mohammad Al-Sahlawi (#10) and Hussain (#2) deeper, unmarked and free in space.

Taiseer Al-Jassim is seen running towards the then-ball carrier leaving 6 Al-Ahli players marking the edge of the 6-yard box with no idea of what to do – Al-Nassr were doing something abnormal according to their reactions. And then came in the cross, out of nowhere jumped the aerially powerful Mohammad Al-Sahlawi to make a bursting stride towards the loose ball in the air to powerfully head the ball in, hitting the bar and bouncing back down. No goal line technology here in the Middle East but the referee claimed it was a goal. 1-0 to Al-Nassr.

One of zonal marking’s key aspects to accomplish success is the awareness of late runners which can be done through a mix of man and zonal marking. Clearly, Al-Ahli failed to do that with all of their players ball watching rather than adjusting their stance according to the player in their zone.

Osama Hawsawi was tracked poorly in this situation and he was a microsecond away from heading the ball in had he made an earlier jump. Followed closely by no one, Hawsawi unluckily nodded the ball over him as his follow through was late.

The reason for that is the 2v3 underload around the penalty spot with Al-Ahli’s attackers against Al-Nassr’s defenders. Once again, the lack of cohesion in the defensive phase for Al-Nassr was evident in situations akin to this. Realise that Hawsawi is being watched from behind him, with that Al-Nassr player leaving his man free to deal with the freedom of Hawsawi. Diabolical piece of defending, but nothing out of sorts taking it into context – we are in the Middle East.

This time the former Anderlecht defender Osama Hawsawi connected impeccably with the cross and scored on Al-Nassr for the equalising goal. The sharing of duties across the Al-Nassr defence, again, was dreadful. Just before the whistle blew for the kick to be played a couple of Al-Nassr defenders took a step forward and back again, uncoordinatedly, and left themselves on the back foot trying to form an offside trap. That’s why Osama scored so easily, while being onside and free in space:

Well with Al-Ahli’s double over league leaders Al-Nassr the Abdul Latif Jameel Pro League is currently on fire. Well, the top four is. Don’t be surprised to see Al-Nassr, Al-Ahli, Al-Ittihad and Al-Hilal taking up the Champions League spots come the end of the season but the separation total in points from 1st to 4th is 7 points – only. With key fixtures in the last four weeks of the season starting off with Al-Hilal vs. Al-Ittihad, before going into the last two weeks of the season where Al-Hilal welcome Al-Nassr and Al-Ahli face Al-Ittihad.

Final Word: Omar Al-Somah has scored 21 goals in 20 games for Al-Ahli this season, proving himself as a modern-day striker that can fit into the depths of this game. Technically able, physical and commanding, Al-Somah will hope that a trial from Europe comes in once again. 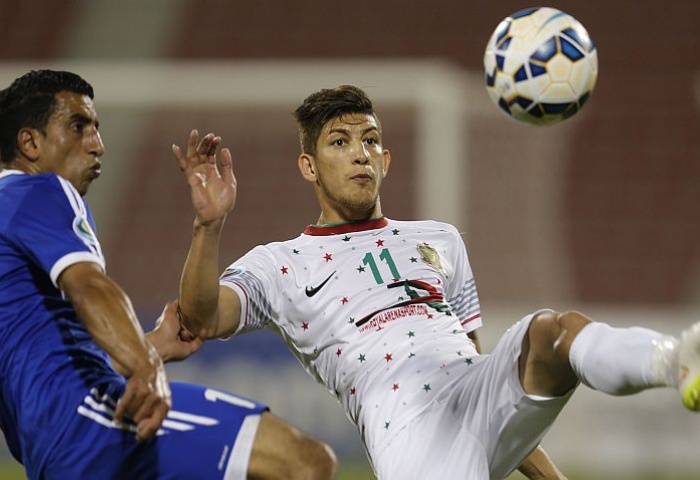