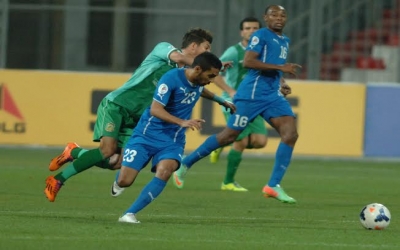 Nicknamed “The Falcons”, Al-Saqr are looking to make their third AFC Cup Group Stage appearance after brief cameos in 2007 and 2011. With last season being only their 3rd Yemeni title win, they will want to keep the trend going.

One defeat in 26 games was enough for Al-Saqr to win the Yemeni League by 10 points and book their place in the AFC Cup preliminaries ahead of Al-Ahli Sanaa.

The tables have turned and it is now Al-Saqr chasing after Al-Ahli Sanaa, who are a point ahead of the current Yemeni Champions (with a game in hand) in 1st place.

Egyptian manager Ibrahim Yousef is the current manager of Al-Saqr.

Bassem Al-Aqel: one of the stars in the team who is great at breaking up attacks from the heart of defence. Also able to lead and marshal the back line.

One of the oldest teams in Bahrain with little to no domestic honours, Al-Hidd have started to push their limits and have qualified for the AFC Cup again, despite finishing outside of the qualifying spots for it last season. A quarter final loss to Qadsia SC in last year’s edition of the AFC Cup (on away goals, subject of an 89th minute own goal) was a harsh exit for them and Al-Hidd will want to repeat their past expeditions.

Finishing only 4 points of the Champions Al-Riffa in 3rd place, Al-Hidd were to be placed in the Gulf Champions League. If not for East Riffa and Manama’s inability to play in the AFC Cup, Al-Hidd would have not been here by now. Problems such as forgetting their name in the draw have slightly baffled Al-Hidd, but their dream has occurred and it’s a 2nd AFC Cup appearance in a row for them.

Al-Hidd are immersed (again) in the top 4 of the Bahraini League, currently known for its competitiveness and minimal separation of points between the top teams. Four points separate the top 4 this year which is the same total as last year.

Local manager Adnan Ibrahim is the man to take them into the AFC Cup this year, with the experience from last year’s exit to Qadsia SC looking very valuable for him and his side. Ibrahim took Al Ahli Manama to their first Bahraini League title since 1995 in 2010, and left to assist with matters across the Bahraini National team (and Al-Ahli got relegated the next year…), Al-Hidd hope that his experience is vital to an overachieving cup run.